There was a large rock in the lake near the end of our dock, and even though we tried to remember where it was, we would sometimes forget and stub our feet on it when swimming. We decided to move the dock over the rock, so that it would not get in our way. 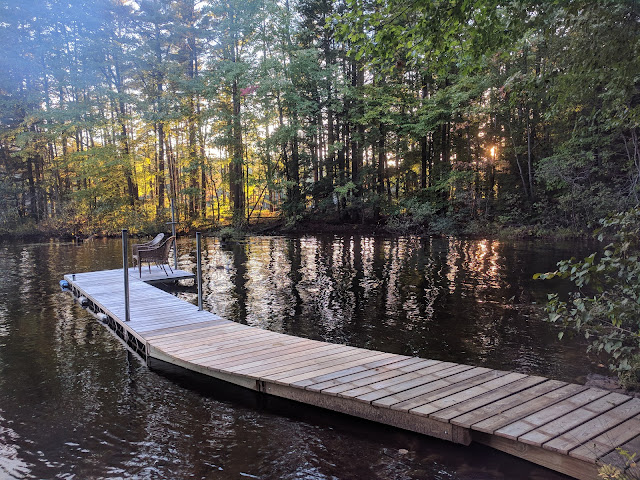 Moving the dock over meant it would have to have a slightly different configuration. The dock itself is aluminium with pressure treated squares of decking laid on top, and had a very heavy ten foot ramp connecting the dock to the shore.

It was time to make a much lighter variation, so we took advantage of the temporarily lowered lake water level to revamp the ramp.

My first step was to dismantle the old dock ramp in place, which was easier than trying to move the whole thing. That did not take too long, and produced a pile of used lumber. 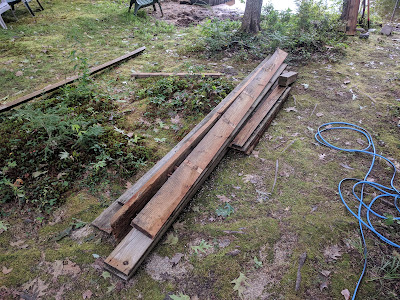 I positioned the dock where we wanted it, and on the shoreline, I installed a vertical 2x10 board with a cleat to hold the first part of the new ramp. 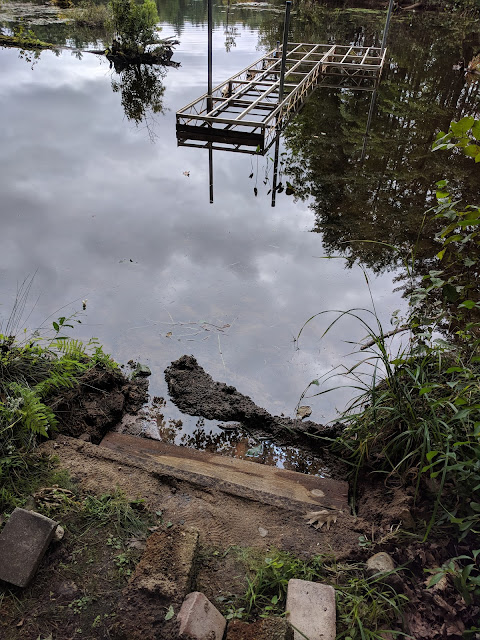 My design is a single 4-legged 'table' that supports two other sections bridging from the shoreline, and to the existing aluminium dock. The 4 legs would need to stand on footings that are horizontal and (hopefully) stay in place during the winters. To achieve this I buried 4 cinder blocks so that their top surfaces were flush with the ground level and level. I am hoping that winter ice will not move these around if they are below grade level. 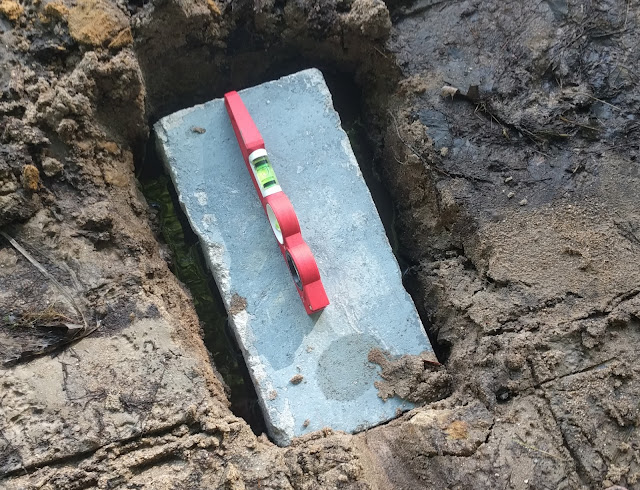 The bench is made from 2x6 wood with 4x4 legs, and stands on the 4 cinder blocks. I am just able to carry the table myself. 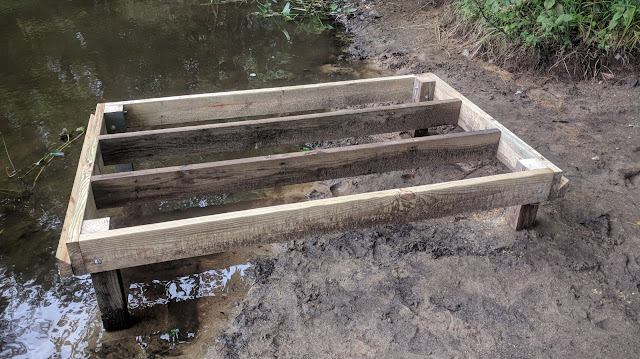 Each end of the 'table' has a cleat on which the other two sections rest. 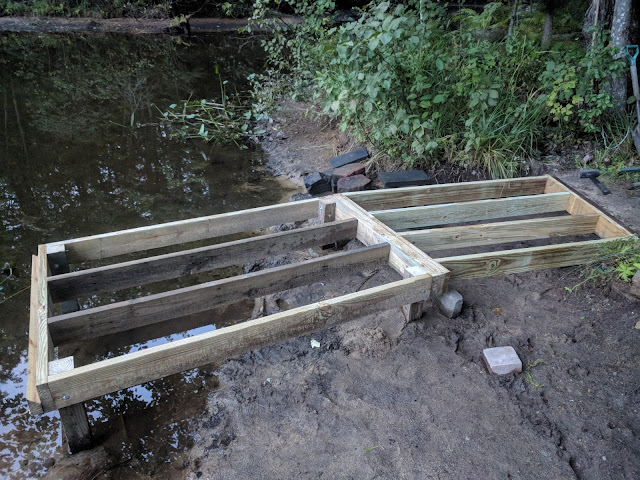 On top of that framework sits a series of small panels made of pressure treated decking. These have been kept small in size to enable easy moving. I also cut the old ones from the aluminium dock in half to make them easier to carry about. 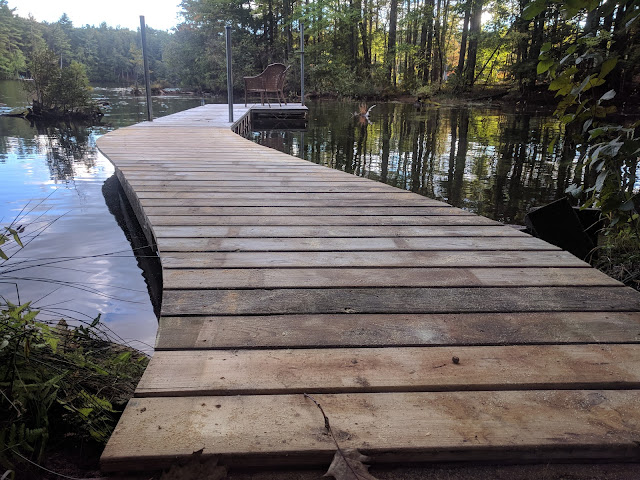 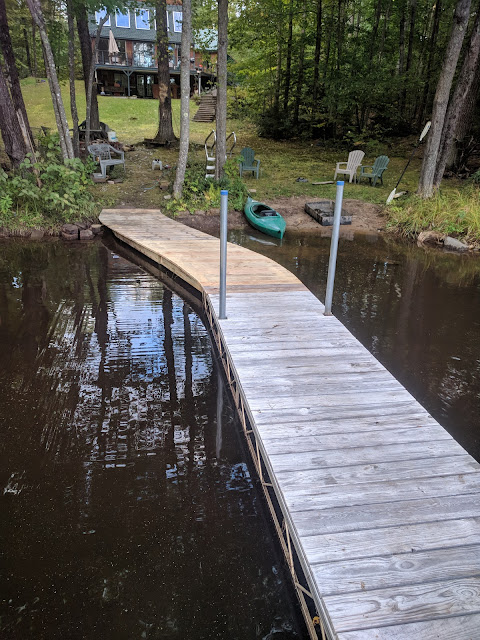 Since the lake water can come up higher than the dock, there needs to be a way of preventing everything from floating away. I therefore buried a piece of 10x2 into which I had screwed a large hook, underneath the 'table'. I connected a short length of nylon rope to the hook, then filled the hole with stones and sand. I now have a pretty solid anchor that I connected to the upper decking layer with a turnbuckle. That will hopefully hold that decking panel onto the table and also hold the table on the 4 foundations. All the other panels will simply be tethered to the main dock parts.


As I was completing the upgrade, Debbie arrived home from the dump with a very nice set of swimming pool steps that had been thrown onto the scrap metal pile. This is now being installed onto the side of the dock to allow easy access to the dock from the water.

During the project I had visits from Aspen, Broadtail, 1200, and Ada at the water's edge.
and also a Northern Water Snake. (Nerodia sipedon)
Since the water level was low, and the wave action had eroded the soil from below the cement blocks protecting the shoreline, I decided to add another layer of blocks below them. So the shoreline retaining wall got rebuilt. 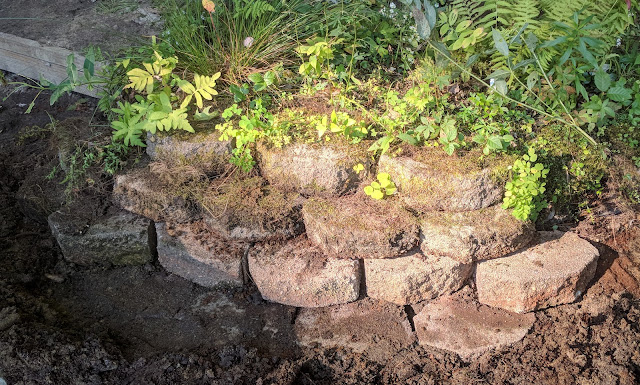